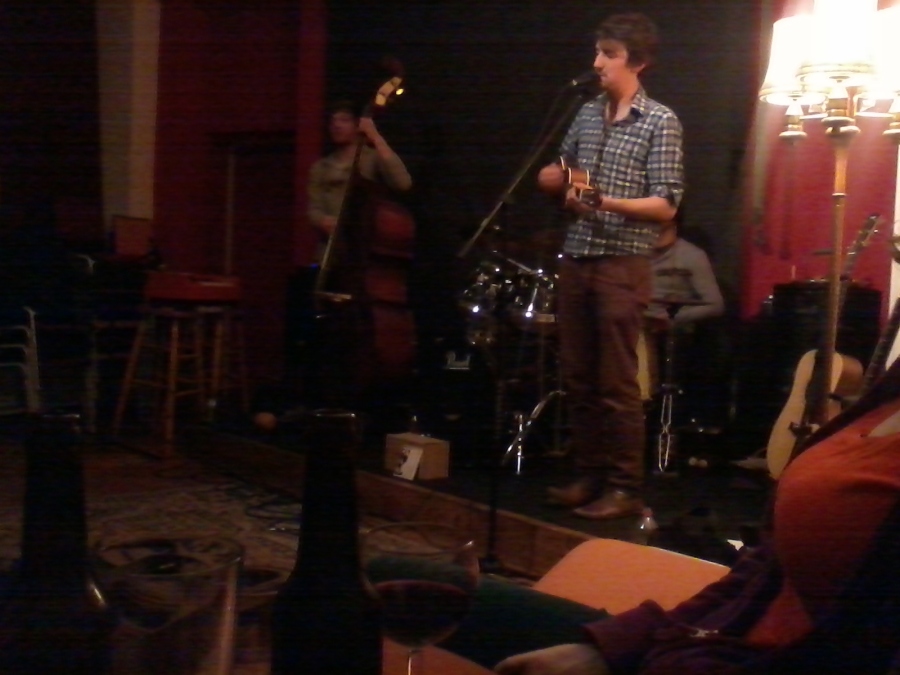 On Sunday evening I made a chance trip to the beautiful St. Gaudy’s cafe, tucked away in Berlin’s very own bohemian suburb of Prenzlauer Berg. After some delicious tacos and cous-cous, we proceeded to the very intimate music-hall of the premises. It would suffice to say that what followed was an evening of melody, pizzazz and razzmataz, due to a couple of very talented artistes performing that evening. One of them was ‘The King of the Bees’, a folkpop band from Saarbrücken, Germany. With an array of instruments enough to make them sound like a full-blown orchestra, they played delectable melodies that captivated everyone and made the ‘Bier-Bier’ taste even better than it was supposed to. Double Bass, harmonica, rhythm guitar, drums, xylophone, ukulele, a sort of rattle-snake sounding shaker and some stuff I can’t recall were all played intermittently by all three band members: Johannes Becker, Moritz Hertel & Martin Schwarz. If their music playing abilities were not brilliant enough already, what impressed me most was the troika of playful lyrics, Johannes’s awesome voice and his brilliant rendition of the vocals. It was one of the most neutral and therefore easy to understand accents that I have heard in a long time. This looks like a band to watch out for and worth buying entire albums of, because every track is a masterpiece on its own. Here are a few samples:

If you like what you here the band can be followed on bandcamp: http://thekingofthebees.bandcamp.com , which is where you can buy their album ‘And there’s no telling’ from for a small price of 5 euros and you can also follow them on their faceboook page : https://www.facebook.com/thekingofthebees